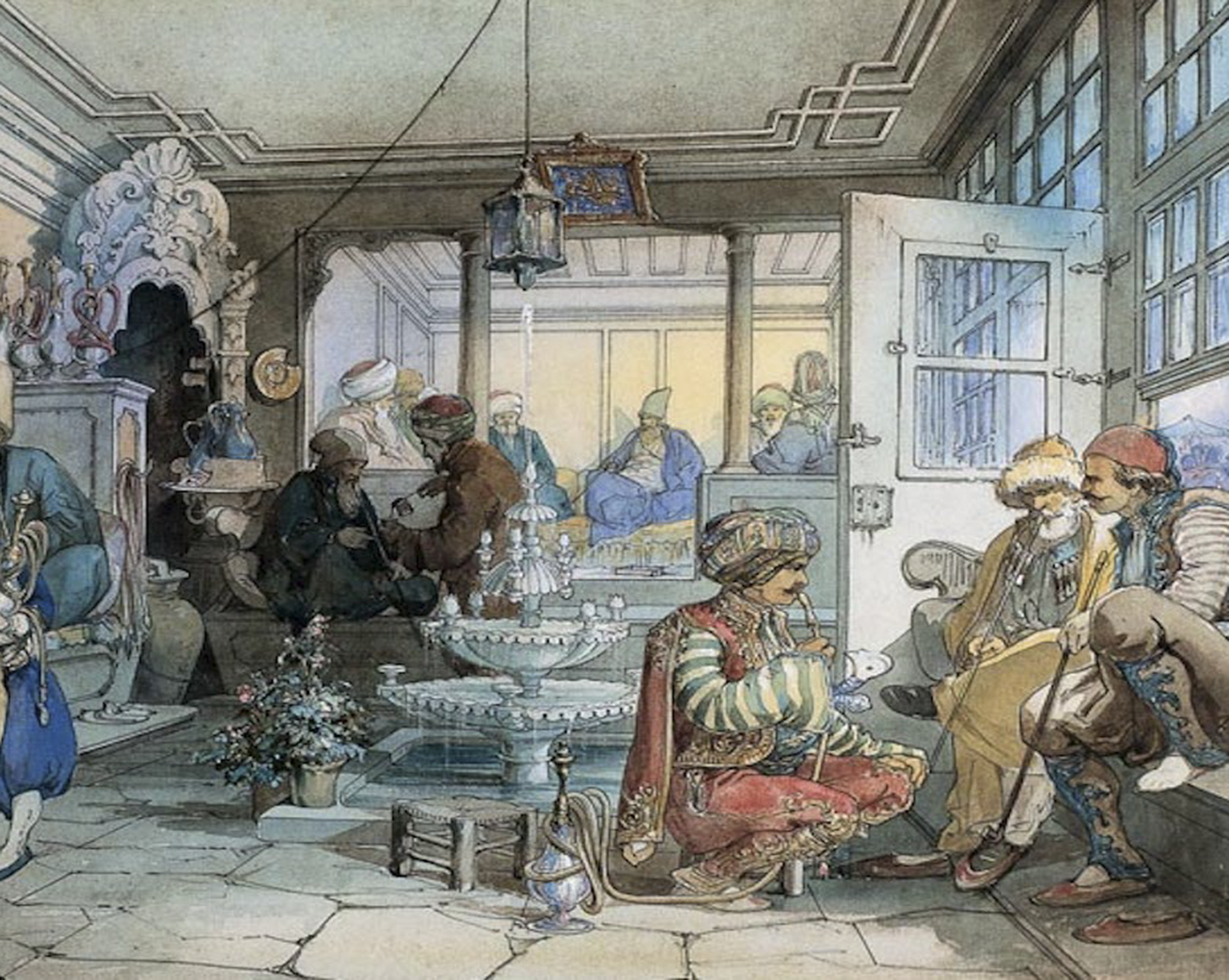 Coffee is a hot topic. Whether its’s the addictive aspect: craving that first sip that makes a morning more tolerable, or the element of kinship: using ‘coffee’ as an excuse to catch up with loved ones, coffee has become our routine, our life blood, our spirit and saviour. Our Knight in alternative-milk Armour. But the coffee cult is nothing new. It’s been going for hundreds of years.

The origin of the coffee plant dates back to 13th century Ethiopia, where the beans were used for their medicinal properties. After the shrub’s introduction into Yemen’s fertile soil around mid-14th century, these ideal conditions for cultivating rich coffee harvests led trade in the Arabian Peninsula to truly take off. By the 16th century the old jitter juice had spilt into Iran, Egypt, Syria, and Turkey. Though we have to credit 16th century Venetian merchants, who travelled from the Ottoman Empire to Europe, for recognising in the powerful libation the qualities of a best-seller.

In the 1600s, the first coffee house of Europe opened in Italy. The unfamiliar beverage was first received with a melodrama appropriate to the post-Medieval period, it was hailed as the: “bitter invention of Satan”. But then Pope Clement VIII got involved, sampled the stuff himself… and issued a hearty Vatican approval.

England was acquainted with coffee relatively late, in 1637. Nathaniel Conopios, an Ottoman Greek from Crete, was the first known person to be seen drinking coffee, as recorded in scholar John Evelyn’s diary. In 1650, an Ottoman-Lebanese Jew named Jacob opened what is disputed as the first coffee-imbibing establishment of the UK. The Grand Café still stands on the site today, and a quote on their website from The Life and Times of Anthony Wood, Antiquary of Oxford 1632-1695reads: “This year [1651] Jacob the Jew opened a coffey house at the Angel in the parish of S. Peter, in the East Oxon ; and there it was by some, who delighted in noveltie, drank.”

In London, Pasqua Rosee opened a shop located in St Michael’s Alley in 1652, Cornhill. It was widely referred as ‘The Turk’s Head’ as a result of Rosee’s portrait painted on the sign, jauntily brandishing a coffee pot. But the mere drinking of coffee was by no means all the coffee-drinkers did. These early cafes were breeding grounds for gossip, education and argument, where men would misuse laws and, in some instances, practice a curiously cavalier form of medicine, even for the times.

Lloyd’s of London (the same Lloyd’s that later became an insurance conglomerate) first came into existence in 1688, by way of Edward Lloyd who owned a coffee house in Tower Street. It was also where news reporting met child labour. Many little boys were employed to ferret out news from arriving ships and report all sorts of hearsay to their patrons.

Meanwhile Jonathan’s Coffee House was where gentlemen gathered to fix the commodity prices. The book Street-Smart Trader: An insider’s guide to the City written by Ian Lyall mentions that “Jonathan’s Coffee house was used from 1698 by the Huguenot stockbroker John Castaing to post a bi-weekly list of stock and commodity prices snappily entitled ‘The Course of the Exchange and Other Things’”.  It seems the gentlemen of bygone days needed their daily dose of caffeine just as our overworked banker bees do today.

The coffee craze was just getting started. Early 18thcentury London accommodated more coffeehouses than any city west of Constantinople. The number ballooned to 550, and each catered to some specific strata of society. Nicknamed “penny universities”, because one could order a cup of joe for as little as a penny and benefit from stimulating, conversation, coffee became a symbol of gregarious masculine commune. Samuel Pepys, John Dryden, Alexander Pope and Isaac Newton all held court in coffee houses.

For literary cut and thrust, you went to Button’s coffeehouse, opened in 1712 by playwright Joesph Addisoneach. Every day the menu featured a hyper dissection of manuscript and verse. You can still visit it now, it has been turned into the modern writer’s hub: Starbucks. Meanwhile at Hoxton Square coffee house, over your mocha frappuccino, men accused of being insane were carted in and interrogated until the excitable customers voted whether they ought to be banished to the local madhouse or released. God forbid getting set upon by those Java fiends!

Although the drink was likened to “syrup of soot and the essence of old shoes” by an early sampler, enough people seemed to like the idea of drinking dirt that soon a handbill was required to inform responsible citizens how to drink the “bitter Mohammedan gruel”. Miraculous cures and remedies followed soon after. Pasque Rosee, writing in The Virtue of Coffeedrinkingclaimed it was bound to exacerbate “mis-carryings in childbearing women, head-ache and the cough of the lungs”.

As the time went by, wives began to miss their husbands. The delicious jet fuel came under fire with the Women’s Petition Against Coffee, which claimed the old tar turned men into;

“effeminate, babbling, French layabouts”, and was responsible for – how to put this diplomatically – decreasing the nation’s birth rate. Men’s Answer to the Women’s Petition Against Coffee retaliated that it was actually “base adulterate wine” and “muddy ale” that made men impotent. They insisted coffee made “the erection more vigorous, the ejaculation more full, adding a spiritual ascendency to the sperm.” And with that the dispute was put to bed (we hope – for the sake of the women – literally).

Though the fair sex weren’t the only detractors. As coffee houses became inherent to cultural life, authority figures began to feel uneasy. In Istanbul the Sultan tried to ban the beverage, but failed due to the widespread outrage of coffee-addicts. In Paris Le Procope was frequented by intellectuals such as Montesquieu and Diderot and soon came to stand for freedom of speech and the urge to revolt. London was no different. Coffee houses were soon associated with danger, and Charles II banned them in 1676, only to open them a few days later due to public pressure.

The Victorian era was exciting both in terms of cultural enlightenment and culinary discoveries from faraway lands. Thus coffee would be toppled from popularity by a new exotic beverage: tea. However, the Temperance Movement, a social movement against the consumption of alcoholic beverages, revived coffee as a gratifyingly non-alcoholic vice, offering it as an alternative to the public houses, where the working classes met and pickled themselves prematurely by boozing with wild abandon.

The question “who serves the best coffee in London?” is still inevitable amongst Londoners. It’s a debate as super-charged as a triple-espresso. The taste of coffee, its origins or how it’s served may have changed. Who knows which of our modern inventions 18th century gent might have enjoyed, oat milk flat white or pumpkin spiced latte? However, there is one thing that remains the same: the passion for coffee. And after all, when you walk into a coffee shop what do you see? Students on laptops, lively conversation, the exchange of ideas and swapping of news. Throughout history, these qualities have always determined the mark of a true coffee house – and we continue that ritual today. 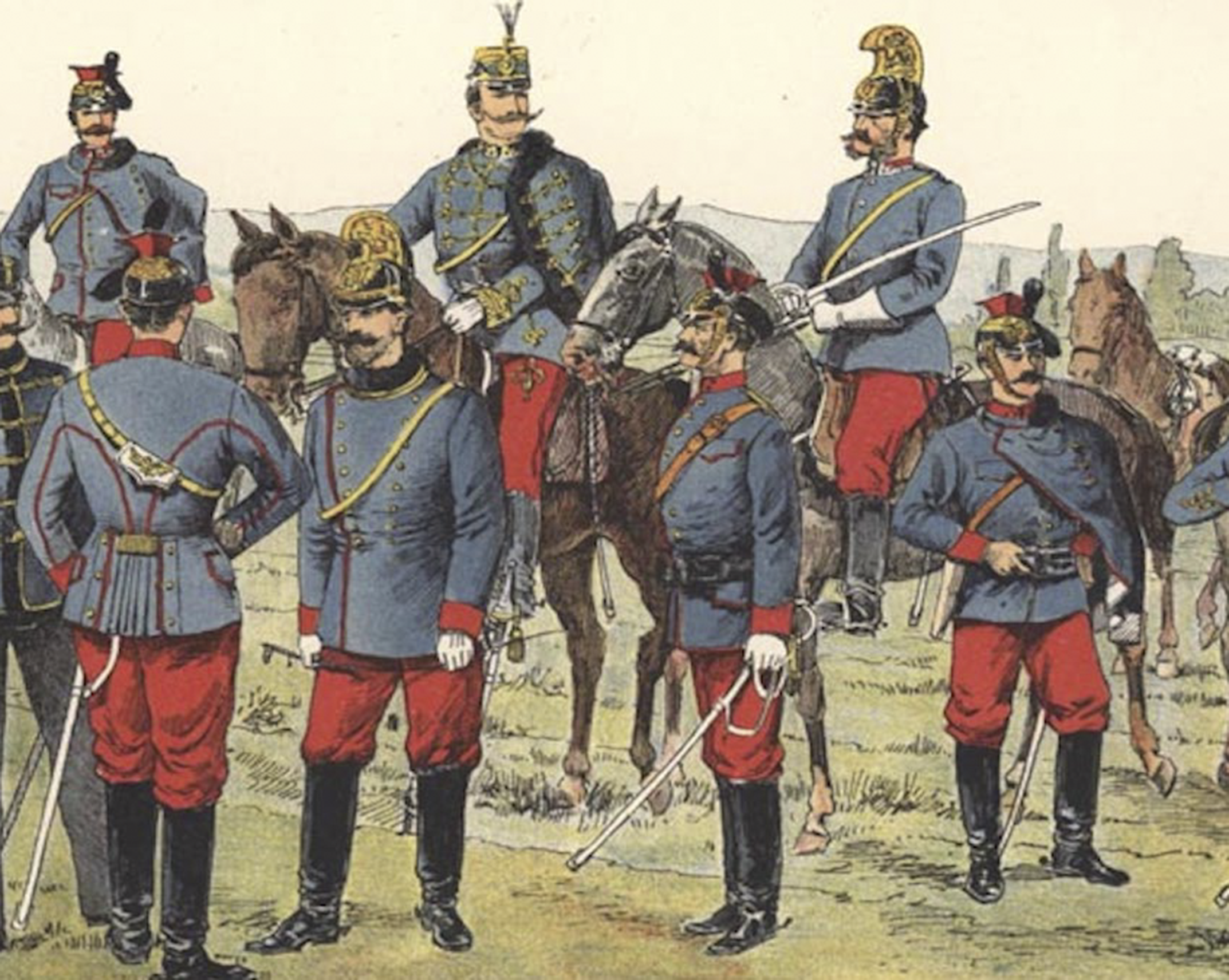 The blue shade was synthesized accidentally in German scientist Johann Dippel’s laboratory, after 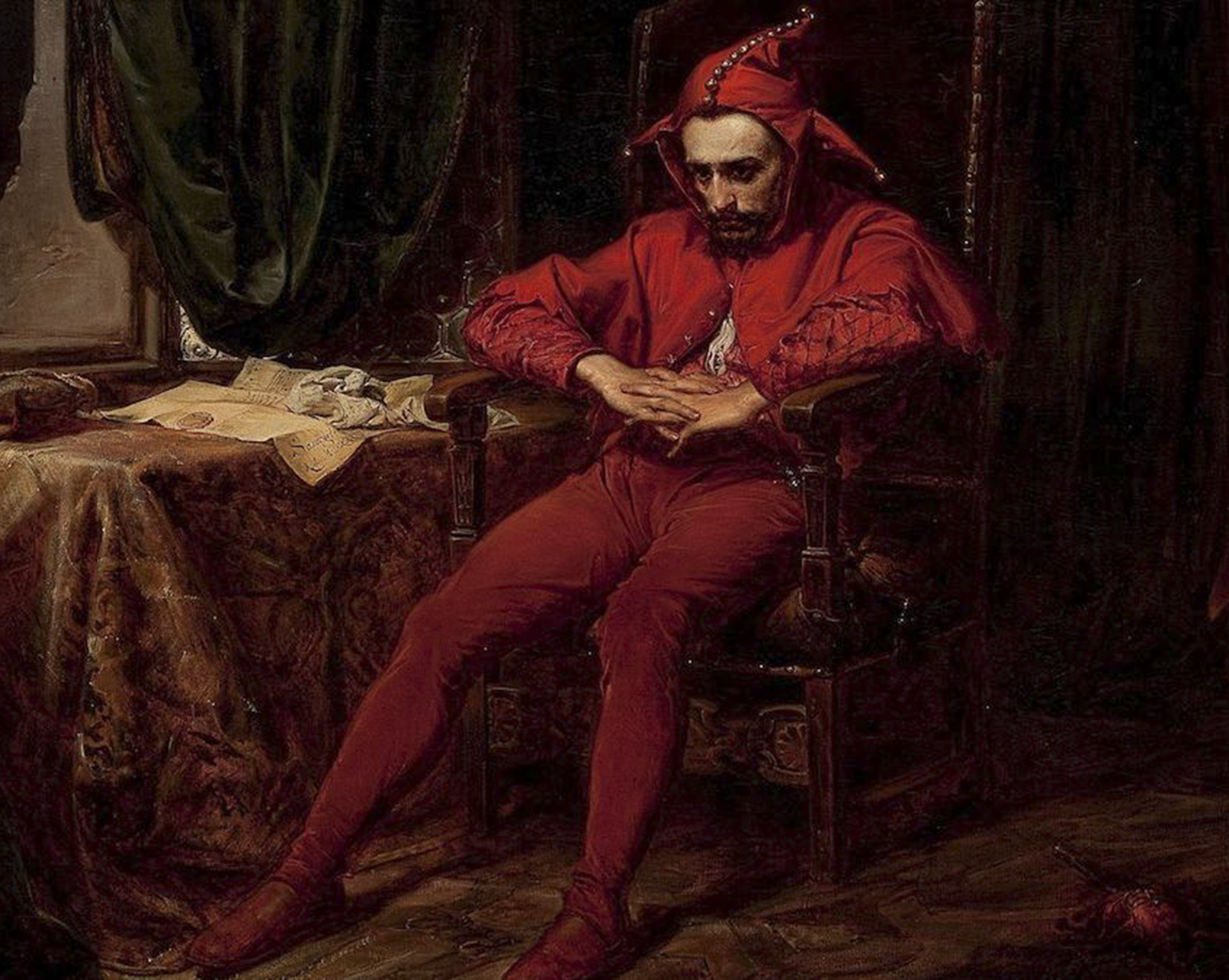 Court Jesters to Jimmy Carr: A Brief History of Comedians 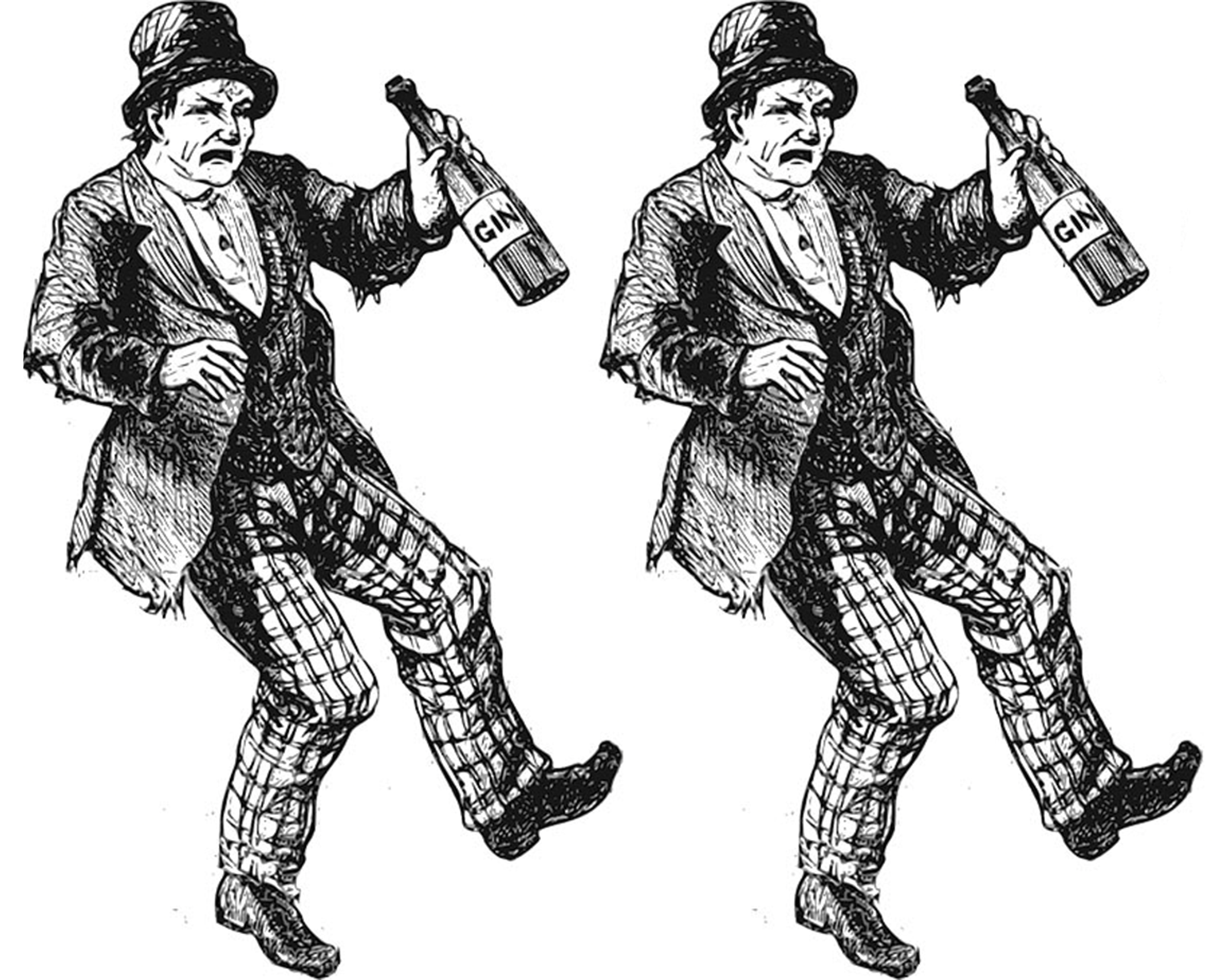 London and gin have serious history. Back in the 1730s, the rate of gin consumption was so extreme i