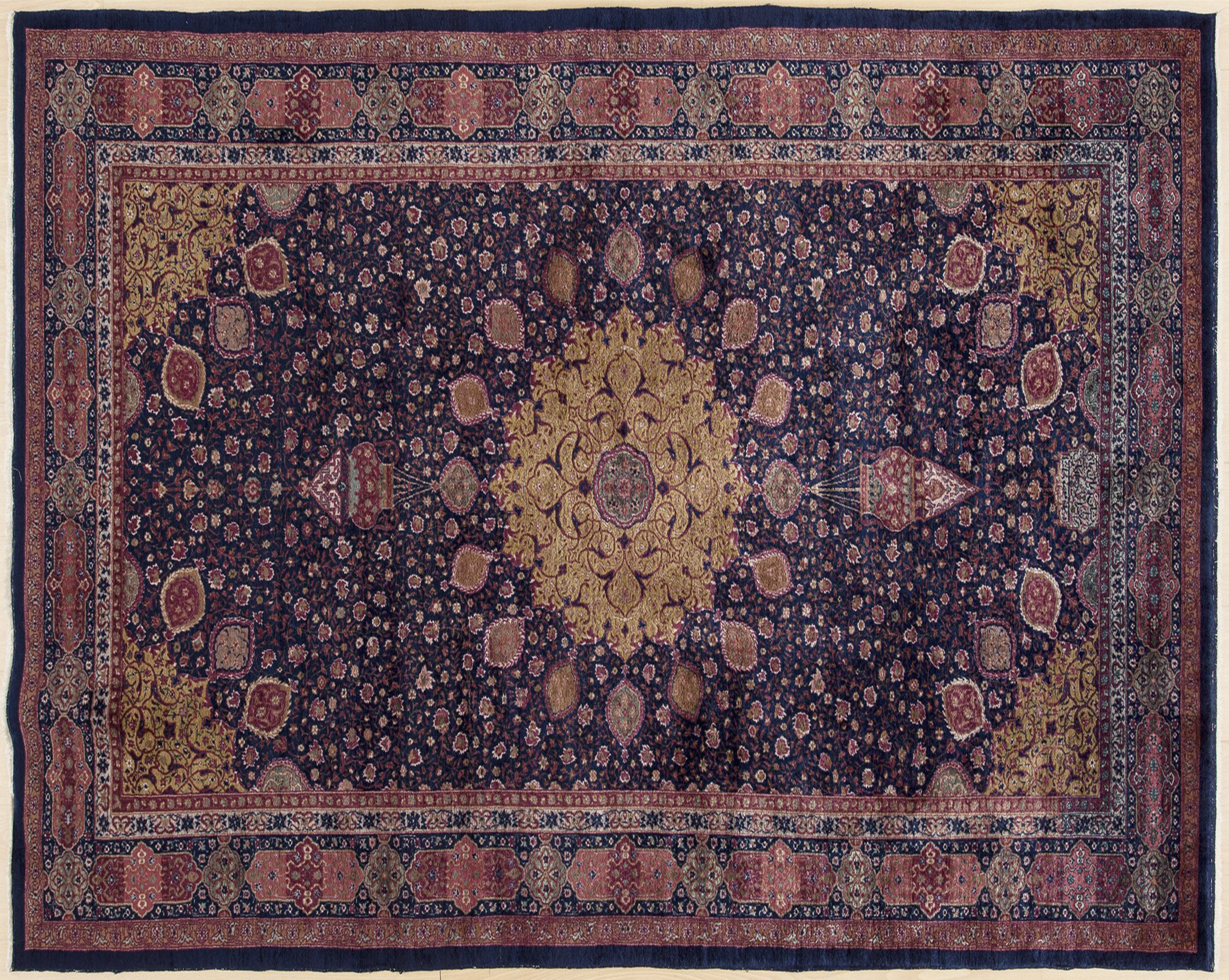 Two years ago on a June afternoon, a Persian carpet went up for sale at Sotheby’s Auction House in New York. The early 17th century carpet—believed to be originally from the Iranian city of Kerman—was of the sickle-leaf design: an intricate flow of vines and flowers with lush luminescent colours. The bidders fought frantically over the item for almost ten minutes until an anonymous telephone caller made the winning bid. It sold for 33.8 million dollars.

The sale caused an uproarious applause from those in the auction house and made headlines across the world.The carpet sold for more than triple its pre-sale estimate, signalling a revaluation of ancient rugs in the art world. Suddenly collectors and enthusiasts questioned: could antique carpets now be valued in the same league as a Picasso or a Rembrandt?

The answer remains as it did two years ago: yes and no.

Leading expert and Persian carpet dealer, Essie Sakhai professes to be underwhelmed by the sale. “To me that is still not expensive for all the work involved when you compare it to a Picasso that took him half a day to make. Carpets take so long and a lot of artistry is involved.” Also, while 34 million might sound like a lot, a Picasso can fetch upward of a 100 million dollars (just recently, Women of Algiers (version O) sold for $179 million). “A lot of marketing needs to be done,” Sakhai explains, “To introduce this art as an art.”

Part of it is exposure. Only rarely do carpets hang on walls in galleries beside paintings and sculpture. They occupy the floor space at our feet: we walk over them, sit over them, sometimes accidentally spill wine over them. The carpet lives on the ground, a location we don’t often look to for lofty works of the human imagination. Yet, as Sakhai points out: “The whole warmth of a room is in a carpet.” For these reasons, the Persian carpet occupies a unique position in the art world: they are aesthetic objects of beauty that also have a purpose beyond being purely decorative.

The history of Persian carpets attests to this. They were first weaved by nomadic tribesman as a thing of necessity alongside fire, food, and shelter. “You can live without a painting,” Sakhai says. “If you lived in a house without a carpet—any carpet, I’m not talking about a special carpet—you’ll find that house is empty. You really need it. The only reason the first human ever made carpets was to be comfortable. You couldn’t just sit on sand or stone. You needed to have something to put on the floor and sit on.” Yet, as the oldest known Persian carpet suggests, the form quickly became an artistic item of luxury enjoyed by the nobility both in Asia and in Europe. For instance, the oldest known carpet in existence—the 2,500 year old Pazyryk carpet—was found in the ancient burial mound of Scythian royalty located in the Siberian mountains. While originating as an object of necessity, the Persian carpet soon became so precious Princes and other nobles were buried with them.

During the Safavid dynasty (roughly covering the sixteenth and seventeenth centuries) carpet weaving was a revered craft. It involved whole villages: a shepherd to shear sheep’s wool; a colourist to dye the wool with natural dyes made from such indigenous plants as indigo, madder, or larkspur; a designer to create a blueprint or plate for the prospective carpet; and numerous weavers to tie the thousands of knots needed to create the actual physical carpet. Rugs could also be made using other materials such as silk instead of wool or saffron flower instead of indigo. The whole production could take anywhere from months to years. Despite advances in technology, much of the process remains the same today. It is because of this large communal production apparatus that authentic Persian carpets have such a high price. Sakhai says that a good Persian carpet ranges in price from “a couple of thousand pounds to skies the limit.”

Essie and the Sakhai family have been in the Persian rug business for nine generations. In his shop on Piccadilly, he dresses in a finely tailored blue suit with a matching handkerchief. He answers phone calls and directs his staff all while discussing the object to which he has dedicated his life. He’s enamoured with Persian carpets, proclaims himself an “addict” even, speaks softly. He is a shrewd businessman and is, at times, somewhat less than candid. When asked about the traits that give away an inauthentic carpet, he shrugs; when asked about his family’s business origins, he answers, “One day I’ll tell you.” There are only a handful of Persian carpet experts in the world and Sakhai is one of them; he’s not eager to hand out his secrets.

That said, he has lots of advice for the prospective carpet buyer. “My first advice is: always buy what you like. Regardless of the age and the price. Secondly: Buy good quality so that it lasts you. As they say, ‘I’m not rich enough to afford cheap.’ ” He also notes that carpets are a valuable investment. “It’s better than gold. After all, what is gold? You go in the ground and bring gold up and you don’t enjoy it. You put gold in a bank. But with a carpet, it has to be made, it’s labour, and it always has to go up. They also don’t make that many of them.” Sakhai has shared his knowledge with many notable clients, including Eric Clapton, Paul Smith, and Diana Ross.

Sakhai believes that the best Persian carpets were made before the Iranian revolution in 1979 and most of his carpets date back long before this time. While he admits that new designs are being developed, he thinks “The Persian carpet’s not being modernized. It’s classic.” At this point, he points to a vibrant carpet on the floor that looks brand new and reveals that it is almost eighty years old. It doesn’t matter if the Persian carpet evolves as a form because they are ageless. We as a culture seem to take these rugs with us wherever we go: be it on the stage of an Eric Clapton concert or the runway of a Paul Smith fashion show. Smith not only draped his runway with gorgeous Persian carpets but he also displayed his clothing and accessories in Essie’s showroom to great effect. In fact, Paul Smith has been so influenced by the carpets’ designs that he even created jackets and other articles of clothing with a Persian carpet aesthetic. It seems that as we move forward into the future we keep bringing these ancient mats with us, perhaps secretly hoping for them to finally lift off the ground and take us to a whole new world. 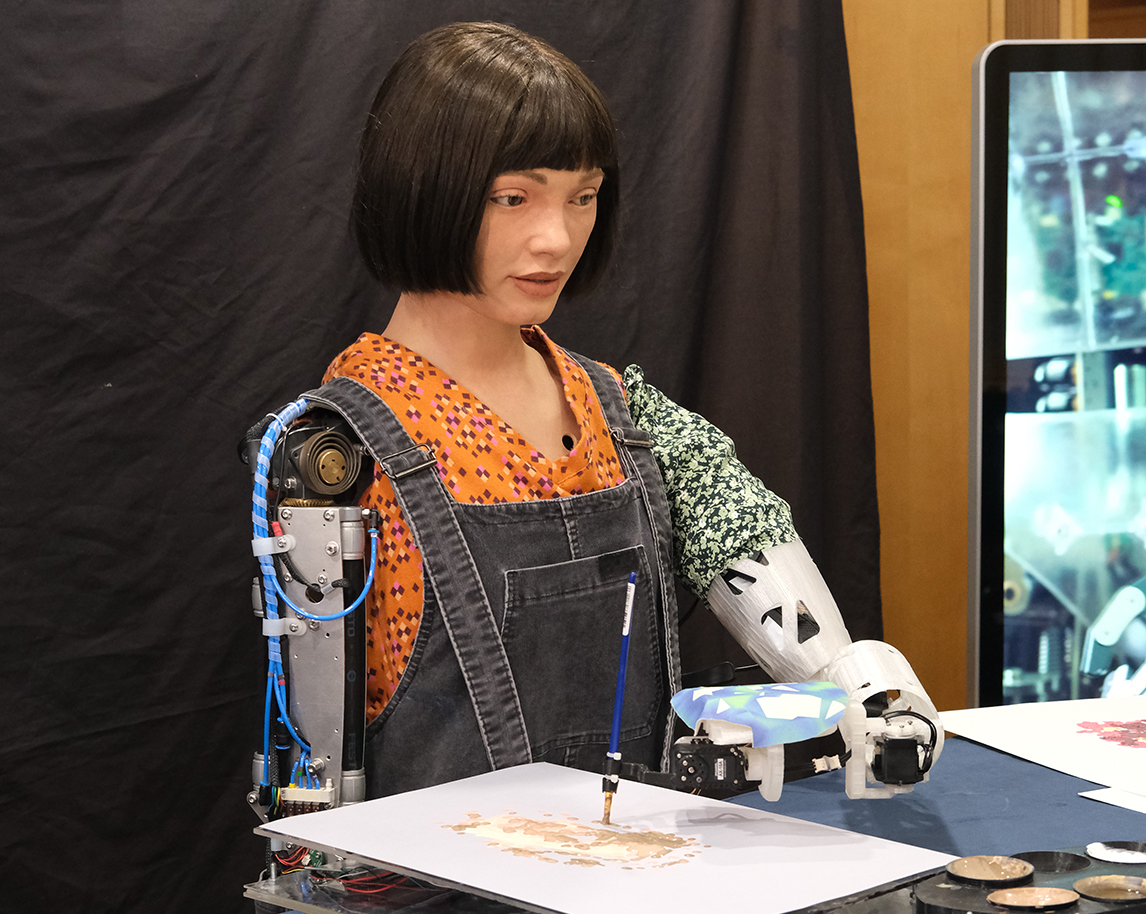 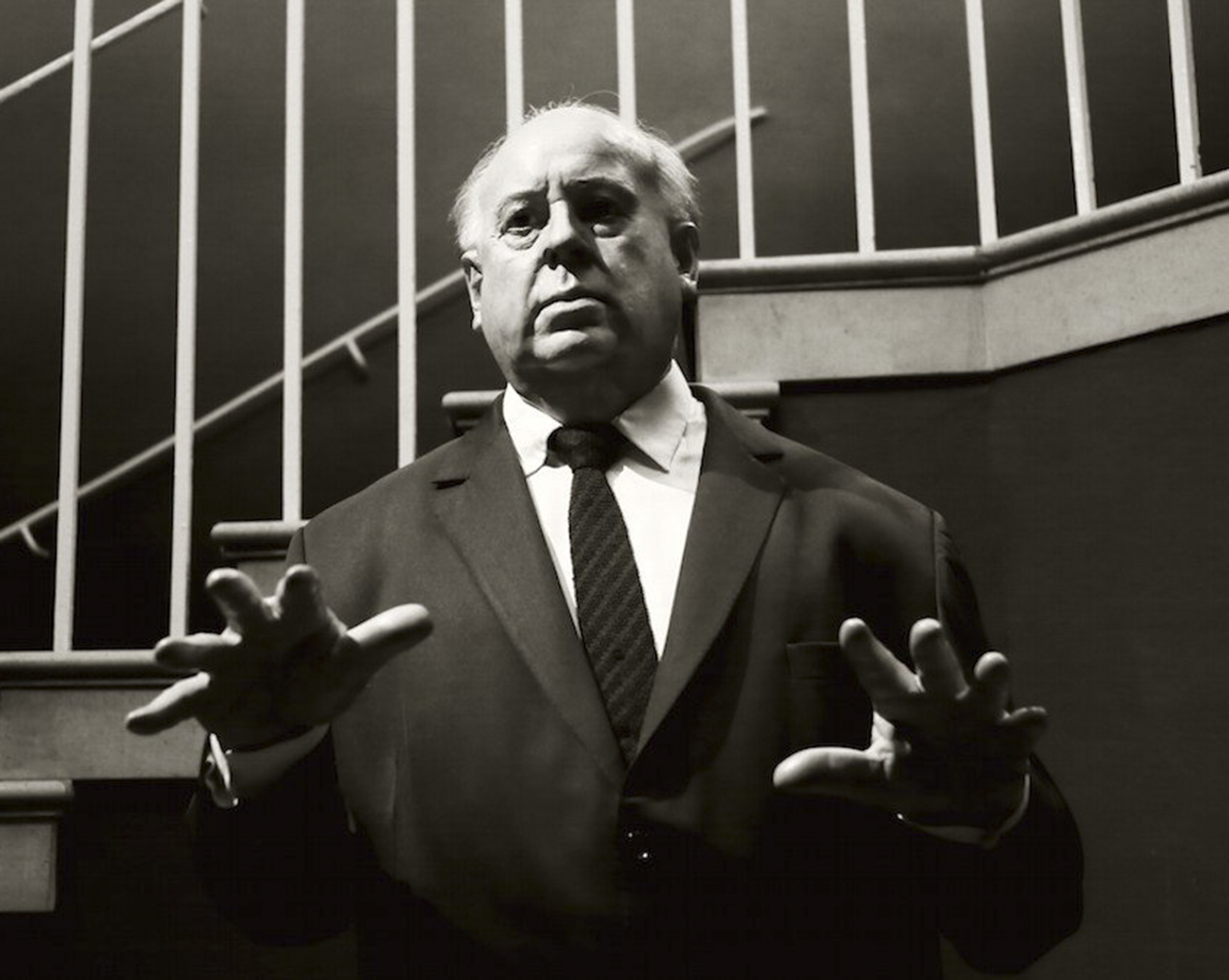 Whilst not being the first place we may associate him with, the city of London is nonetheless a cons 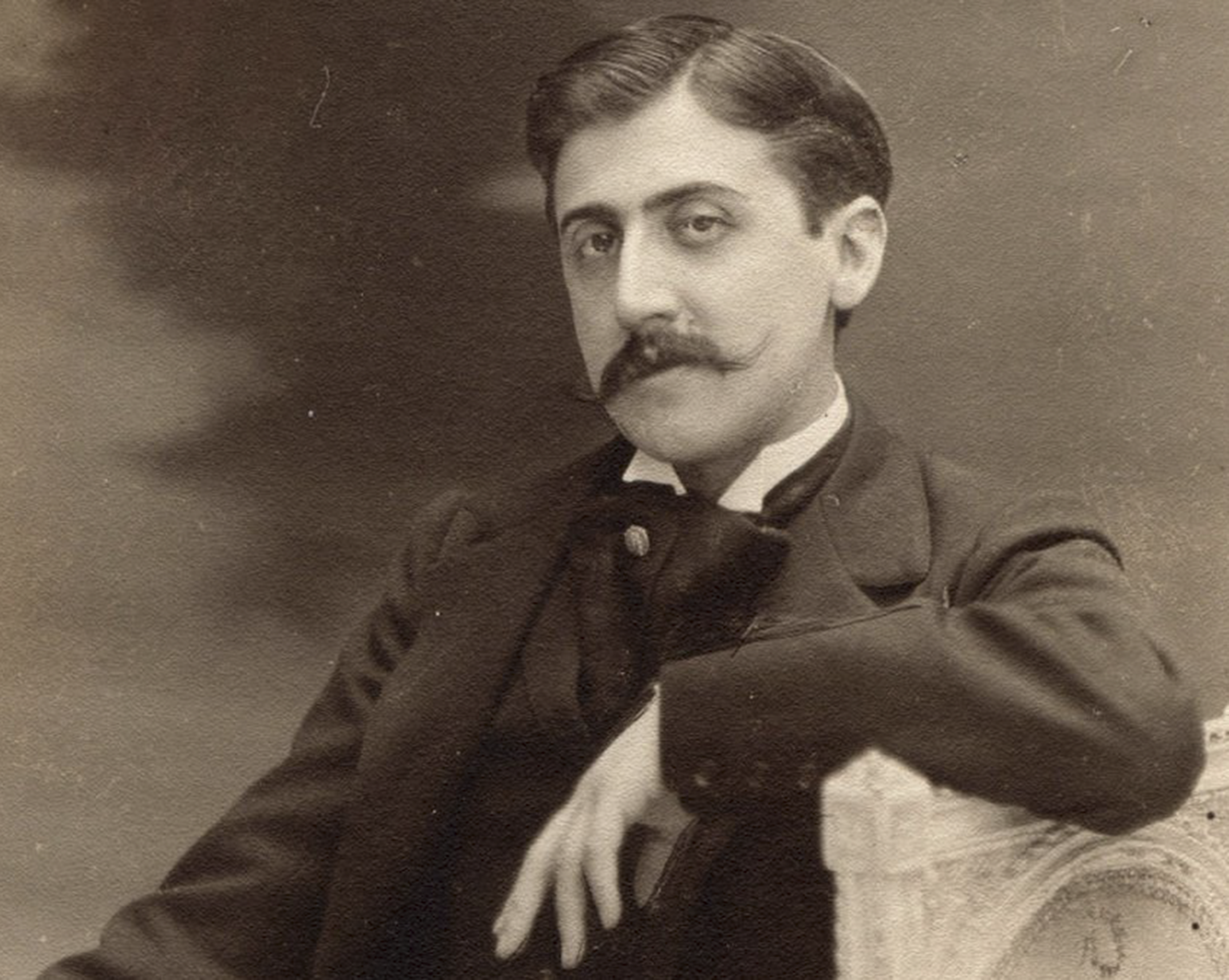 Wearing a Book: Texts vs. Textiles

In his In Search of Lost Time, the French writer Marcel Proust makes a comparison between writing a