Damien Frost, graphic designer, native Australian and creator of theatre posters for shows such as Bird Song and The Children’s Hour is gaining further attention by moonlighting as a photographer; capturing the eccentric and dramatic microcosms of London’s Soho as part of his ‘A Photo a Day’ series.

“I’ve always wanted to take portraits,” says Frost, “but I’m quite a shy person and I can’t approach people on the street easily.” The graphic designer-turned-photographer is as unassuming as his subjects are the antithesis, and as shy as his characters are outlandish, dressed in a plaid shirt with an apologetically soft spoken voice. However his excitement and involvement in the project was glaringly apparent throughout the duration of the interview, his eyes widening when talking about his experiences, and his new found friends. The series, which began as fairly amateurish shots of London’s livelier individuals spiraled into a carefully curated stream of personal portraits of drag queens, theatrical dressers and interesting personalities, shot impromptu.

Jetting from his day job as a graphic designer to shoot in the streets around his Soho offices, Frost would often have to wait hours for the perfect shot, the perfect subject. “One of the hardest parts about the project was walking around no matter the weather and having this immense personal pressure,” he says, “sometimes it’d get to about twelve o’clock and I’d just not find anyone. But there are a lot of photos I wouldn’t have got if I hadn’t persisted.” Always staying true to the project, Frost uploaded a daily photo to his Tumblr and Instagram portfolio, choosing an image from a previous outing and never cheating (which must be paying off if you glance at his 56k plus followers!)

“They have to have something interesting about their look,” says Frost, “this is going to sound bitchy but some of the people I’d stopped in the beginning [of the project] I probably wouldn’t stop now. I think it would be a lot harder to do the project again as I am a lot more particular.” It’s not only the photographer’s eye that became fine tuned as the project progressed but also his style of portraiture. “I always tell my subjects to think of it like a classical portrait or painting,” he says, “I wanted to make them seem less like a street portrait.” The images, set against a dark background, hold similarities to neo-classical portraiture, with the subjects sitting at a three quarter degree angles, staring directly into the lens. 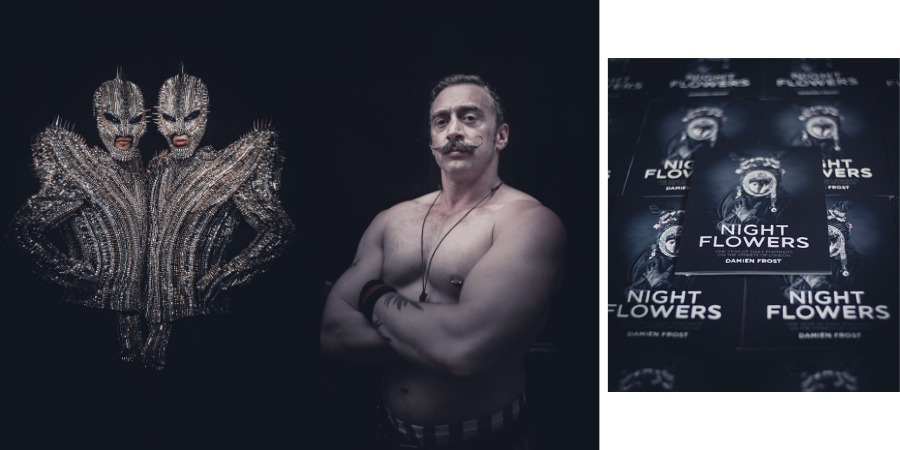 This juxtaposition of incredibly modern London’s eccentrics with a very traditional style of portraiture is perhaps one of the reasons why Frost’s portfolio of work is so compelling; drawing old from new and dignifying his subjects rather than ostracizing them as abnormal. “I think [the subjects] came to respect what I was doing,” he says “I consciously tried to give them integrity.”

Through his series, Frost has created strong bonds with some of the participants in the project, immersing himself in particular with the drag queen scene, learning over time which club nights would attract the best attires and where to wait for the perfect shot. Through these friendships, Frost also encountered the downside of dressing in the way that attracts him to his subjects, “you may think ‘wow, these people have the confidence to walk the streets like this,’” he says, “but when you walk with them you realize how many [negative] comments they get. They put up with a lot of shit.”

Currently attempting to have the project published as a book, provisionally named Night Flowers, Frost is continuing his photo a day series on a much more casual basis. “I haven’t completely got out of the routine of doing this,” he says, “the funny thing about the project is that every day you’re after something interesting. You’ve got no idea what the day’s going to give but you always know you’re going to meet someone new.” The project seems to have done more than gain Frost popularity as a photographer, it appears to have lured a once shy artist from his shell into the Circus of Soho’s nightlife.

Few days after the interview Damien Frost got in touch with us and added a note to discussions on Soho and our alternative London that we felt had to be included for it’s honesty and relevance.

“I feel I need to clarify something… since (the interview) the Black Cap has been closed as well. It’s definitely a blow for the scene since that had started to really flourish for great cabaret and performances in the wake of Jojo’s closing. But I still do think that a culture is more than just a venue and shouldn’t feel defeated just because a venue closes – it’s certainly tragic when somewhere with so much history closes but a culture is a fluid and adaptable thing and it can move on and adapt and new opportunities can grow from this and this might mean a younger generation starting something up or setting up in more temporary spaces and while it may become a bit more fragmented for a while the culture lives on and grows and you can’t kill this by shutting down a venue. Realistically it’s the ugly side of gentrification that traditionally it’s the artists and alternative cultures that give an area an essence of cool and then they’re the first that get shoved out when people want to capitalise on this cool and that’s a process that is near impossible to stop.”

Experience three stunning photoshoots channeling the Spanish spirit, their skill and taste against the cold, competitive backdrop of London.

It seems our nation - and the World in general - has gone completely cuckoo for political correctness.