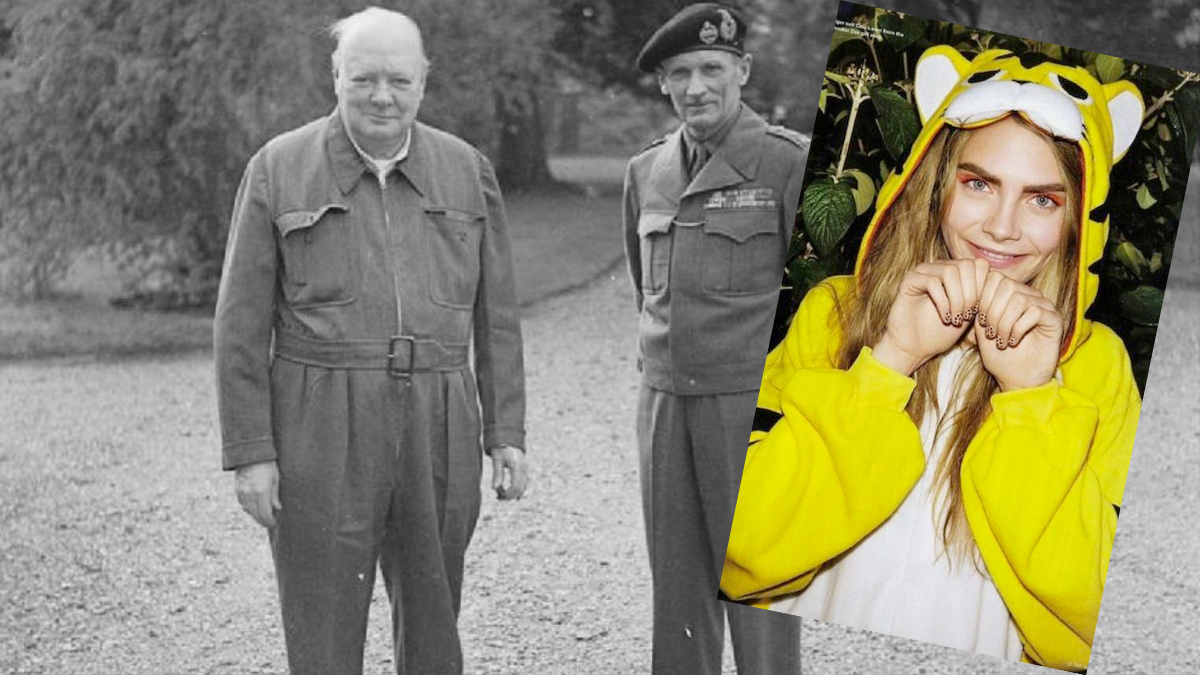 A History of the Onesie: From Churchill to Cara

Fashion trends are always changing. From high waists to low waists, bell-bottoms to skinny jeans. But if there is one piece of apparel that is going through a certain cultural moment, it is undoubtedly the onesie. The one-piece pyjama seemingly came out of nowhere until suddenly everyone was wearing one. Never before have celebrities, politicians, and drunken lads on the tube shared the same sense of fashion. The robe immediately draws comparisons to the imaginary garment; “zippicamiknicks” from Aldous Huxley’s dystopia, Brave New World. The futuristic female undergarment had one zipper for easy and efficient disrobing. The “zippicamiknicks” in that book were the adult pyjamas of an overly infantilized and complacent society. As eerily similar and prophetic to Huxley’s imagined undergarment the modern onesie may be; in actual fact the two pieces of apparel represent very different things. As cute and cuddly as onesies are, they function as a much more radical and rebellious undergarment in our current cultural climate, and you will soon see how! Yet how did they become so popular in the first place?

The history of the onesie begins with the history of pyjamas and other loungewear. Wearing clothing specifically for bed or relaxing is a relatively modern practice: between the middle ages and the 19th century only super rich kings and nobles had separate clothing for bedtime; most people slept in their day clothes or—if you were an up and coming middle class bloke—you slept in your undershirt. Back in the day, having a shirt that you wore under another shirt was as posh a status symbol as today’s apple watch. It was only in the latter half of the 19th century that pyjamas received wide spread popularity, due to returning British colonials from India. In fact, the etymology of the word ‘pyjama’ comes from the Hindustani word pajāmā. Despite the growing popularity of pyjamas during the Victorian period, it would still be another hundred years until someone came up with the bright idea to combine comfortable pants and a shirt into a cozy one-piece garment. But who can be credited with this simple yet genius plan?

Surprisingly, one of the early inventors of the modern onesie is none other than (drum roll please) Winston—this is no joke—Churchill. The great prime minister designed his one-piece “siren suit,” as he liked to call it, [ulplocker id=vCA7IBQixkFiVnMb]for maximum coziness and dexterity while fighting the Nazis. He even wore it in meetings with other famous leaders like Franklin D. Roosevelt and Joseph Stalin.

Another early influence in the creation of the onesie was the “union suit” designed in 1860s America. The one-piece long underwear was advertised with the tag-line, “emancipation under flannel.” Similar to Churchill’s siren suit then, both early prototypes of the onesie were more than just cozy garments; they were seamed with patriotic, revolutionary, and radical ideas.

This still holds true today. Most frequently used in celebrity culture, onesies have the effect of subverting one’s preconceptions of a person’s identity. When actor Ryan Gosling wears a onesie on the Ellen DeGeneres show, he’s instantly reworking his stoic leading man veneer. Similarly, British model and actress Cara Delevingne wore a pepperoni pizza onesie that completely covered her entire face and body. It was a shocking gesture towards a culture that objectifies women by someone who actually profits from that said culture. To don a onesie then, is to say a rebellious “Fuck you” to a judgmental world in the friendliest and most adorable way possible.

But the onesie is more than a piece of rebellious apparel. It symbolizes a lifestyle of being chilled out and free. In some ways, it harkens back to a day and age of pure nakedness. Each belt, shoe, pant, and undergarment creates one more layer between us and our original bodily selves. The onesie breaks that down to one layer, one piece.

Thus the onesie is both revolutionary and reactionary, liberal and conservative, subversive and ridiculous. Perhaps the onesie has become so pervasive in our society because it represents things everyone believes in: unity, peace, and togetherness.

Now if only we could wear them to work. 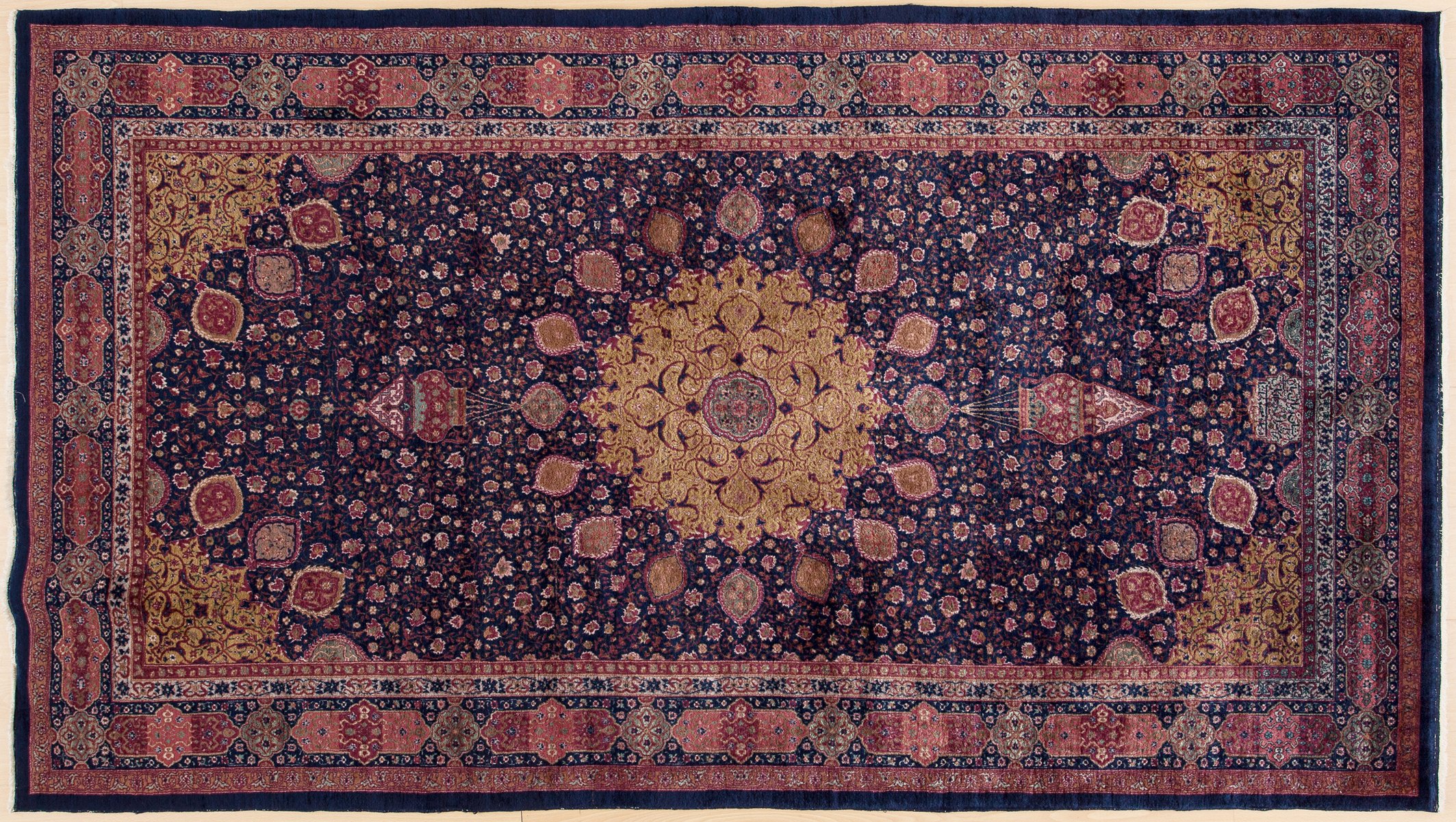 Could antique Persian carpets now be valued in the same league as a Picasso? We interviewed leading 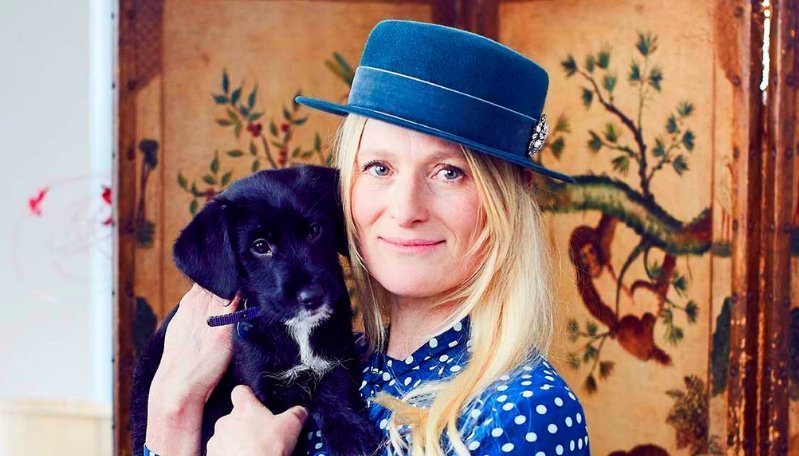